Skip to content
With vacation season being on in the Eurozone newsflow from that part of the world has suddenly fizzled out and the risk trade has come back in right earnest. Global markets that were as it is itching to move up after a period of uncertainty have continued to build on the rally started by Draghion the last Thursday of July by making comments on doing everything to ensure the survival of the Euro. Specific to India despite no specific reform/ economy boosting measures being taken on by the government we have seen significant fund flow from foreign investors and markets have held on quite well. The markets have also taken the appointment of the new Finance Minister positively and the expectations on some investor positive measures have grown. It is clear that the government has realized that investments in infrastructureneed to be boosted and manufacturing needs to pick up pace for the revival of the economy. At this point of time there seem to be some trends setting up on which I will make some comments.
Bonds to equities trade is on – it has been my belief for some time now that irrespective of global growth concerns bonds are much more overvalued vis a vis equities. The record low rates of bonds of Germany and the US are clearly unsustainable. Bunds have moved from ultra low yields of 1.1% to the current levels of 1.4% and similarly US bonds from 1.3% to 1.65%. The selloff in bonds still has a long way to go and the only thing that could explain the ultra low yields was extreme fear and maybe a long term outlook of deflation. Technically a clear top seems to have been made in bonds and the previous two selloffs have yielded very strong equity market moves as reflected in the chart given below. The selloff and shift into riskier assets seem to have a long way to go. However an interesting phenomenon that is being observed this time is that ex of crude oil and some agri commodities that have moved up due to weather concerns most industrial commodities as well as products like rubber, steel inputs, palm oil, thermal coal etc. continue to trade at levels last seen in 2009. Demand conditions for a large number of commodities continues to be weak given the global slowdown and given the fact that the Chinese slowdown still has some way to go we could see a number of commodities where a majority of incremental demand was coming out of China continue to remain subdued. 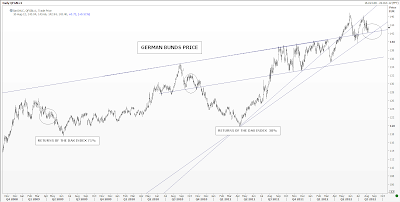 As has been seen historically typically these moves are multi month moves and the probability that equities will remain buoyant for a few months is increasing.
What explains strong funds flow into India – Domestically a large number of investors are perplexed by the significant foreign fund flow into India. Since the beginning of the year we have seen nearly USD 12 bn come in from FII flows. Although domestic flows have been muted till date the flows from the insurance sectors is still positive and the data for last year reflected net inflow from insurance into equities of around USD 7 bn. The most interesting thing about this phenomenon has been that given the fact that markets have been subdued despite such strong flows and this combined with the fact that primary fund raising has been extremely low the floating stock absorption out of the markets is very strong. Any growth revival in this scenario will lead to a strong market upmove. I believe that in the medium to long term the problem of India will be that of plentiful rather than low foreign investment flows. As FDI opens up over a period of time the flows will only increase. The main reason that i think that money flow in India will be strong is that in a global economy facing deflation and low growth an economy like India that has inflation (and not stagflation has is being loosely talked of these days) and a growth of 5-7% in terms of real GDP growth will continue to attract foreign capital. Also given that we have seen the peak of inflation in India and given global commodity prices the outlook for long term inflation is on the side of moderation the probability of further downside risks to economic growth are likely to recede going forward. Domestically we have also seen some moves being mulled over by SEBI in order to boost MF inflows. A restart of domestic flows into Equities will also be supportive of equities.
There is no logic focusing on near term P/E ratios – Mkt Cap/GDP is a better measure
Companies in an economy go through cycles of profit expansion and contraction. For example today we see that profits of companies in the US are at all time highs as input prices, labour costs, interest costs etc. i.e. all major costs are trending down and are at low levels. Discovery of shale gas and lower energy costs are also contributing to increased profitability. On the other hand profitability of companies in India have been subdued due to higher input costs, high cost of energy, extremely high interest costs, falling demand and the sharp depreciation of the Indian Rupee. However this cycle is now coming to and end and going forward we will see both gross profit expansion and improved below operating profit cost improvements. 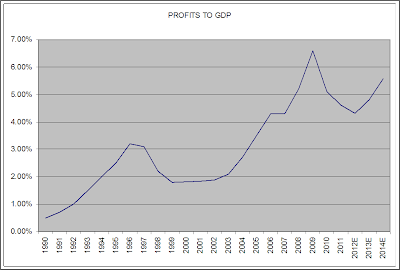 •
In January 2008 India’s market capitalization peaked at Rs 75 Lakh Crores and Market cap to GDP was at 160%.
•
•
Current Market capitalization stands at approx Rs 70 Lakh Crores and Market cap to GDP is at 77% on 2011-12 GDP.
•
World Market Cap to GDP stands at around 100% at this point of time.
•
Profits of companies/GDP ratio is cyclical, but with an upward bias in India .
•
The last three years have seen a profit compression
•
However this cycle is likely to see an upturn from FY 2013 onwards.
•
India is expected to conservatively have a nominal GDP growth of 12-15% per annum over the next 5 years.
As profitability improves P/E ratios should also move up.
Markets
Despite all growth, policy inaction, high interest rates and fiscal deficit concerns the outlook for the markets looks to be positive in the near to medium term. Longer term outperformance requires structural economic improvements and growth with higher productivity & by implication lower inflation.
Did not write over the last many days due to a broken finger which made it difficult to type. Will try to write more going forward.
Tweet