Skip to content
What a month this was. As I wrote at the beginning of the month, there seemed to be too much pessimism going around in the markets, both domestically as well as globally. As such positive outcomes of key events always had the potential of creating a strong market upmove. Cash positions were high and derivative markets were oversold at the end of August.
The month started off with the much anticipated meeting of the ECB where the contours of the bond buying programme were to be announced. The “Outright Market Purchases” announced by Super Mario were taken positively by the markets and it led to a significant upswing in the bond prices of Spain & Italy with long term bond yields falling between 5-5.5% for both the countries. Given that the focus of the purchases was on buying shorter term bonds the short term bonds had already rallied pre ECB meeting with the yields on these bonds nearly halving from where they had reached a couple of months back. However the rally in the bonds also happened with the expectations that will ask for a bailout in some form after the ECB announces the bond purchase rules. However, as politicians are the Spanish PM seemed to be getting into the false impression that the bond rally has happened due to some reforms that they have announced and bailout can be postponed. This is clearly dangerous, as we have seen in the case of . Excessive delays in asking for a bailout when you are clearly stressed will ultimately cause more pain. By the end of the month the Spanish government also came out with its budget where they have proposed significant deficit control measures and some reform measures. In case they go in for support from the ECB now things could be manageable in that country, however delays could be dangerous as the long term bond yields have again gone above 6%. Following the ECB meeting there was the ruling on the legality of German contribution to the bailout funds, which was a last hope that bears were betting on. However that also went on the bull side and strengthened the market upmove.
Then came Mr. Bernanke where the FED was clearly under pressure to do another QE and they obliged. Although personally I believe that the FED is building up excessive risk on its balance sheet by more and more asset buying, the markets seem to believe otherwise. Most of the long duration bonds are now being increasingly held by the FED which exposes them to huge interest rate risk if bond yields shoot up at some stage.QE3 was announced as an open ended measure with a focus on the housing market & buying of Mortgage Backed Securities to the tune of $ 40 billion per month for as long as it is required (the cue was obviously taken from the open ended announcement of the ECB and the positive market reaction to the same). In the immediate term it did have an affect with the long term mortgage rates falling to new record lows. Signs of the housing market revival are on in the and this move should accelerate the pace of revival. However as a side effect it could also lead to a spike in the CPI where housing has a big component in the . The weightage that food has in the Indian CPI is almost equal to the weight of Housing in US CPI i.e. 40%.  Given that the economic data coming out of the has been mixed and on policy there is likely to be a standstill till the presidential election, it seems that the FED had little choice but to act. The important thing in all these bond buy programmes will always be the exit strategy on which there is no clarity at this stage. Post elections in the the entire issue of Fiscal Cliff also needs to be dealt with, which could create volatility in the markets going into the end of the year and early next year.
Now coming to the domestic side of the market. After the new Finance Minister had taken over there were lot of expectations that got built up. The draft Shome panel recommendations were very positive with their recommendations to do away with capital gain taxes altogether on listed stocks. This and the recommendation on GAAR have the potential of creating a huge incentive to invest in equities in which is an under owned asset among domestic investors. It will increase the attractiveness of equities significantly on a post tax basis. This move by eliminating the potential of taxation disputes could also move the offshore fund management industry onshore and create a huge new market in . The numbers on inflation as well as Industrial Production growth that came out were not great with IIP being lower than expectations and Inflation higher. The generation of junk data from Indian statistical offices continue with the spike in inflation for this month being singularly contributed by the much delayed revision in the index of electricity cost. By the middle of the month the government also suddenly got into the reforms mode with announcements on FDI policies for Retail and Aviation as well as subsidy reforms. This started a virtuous cycle with bond yields getting capped, the rupee starting an appreciation cycle and stock markets moving up. More reforms are likely moving forward as the Trinamool Congress that was singularly holding back most reform measures now out of the government. The INR has already appreciated by 5% over the last month and is looking to move to around the 50 levels by the end of the year. INR depreciation has been one of the major reasons for high reported inflation. With the fall in a majority of global commodities, INR appreciation and a decent monsoon in the end we should see a rapid fall in inflation in the year 2013. Government subsidies on imported petro products and fertilizers will also see a significant reduction if the INR appreciation sustains. 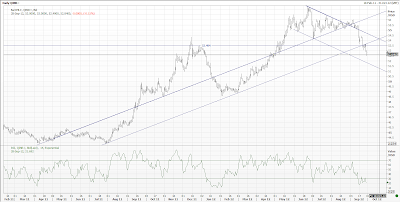 The announcement on the setting up of the National Investment Board is a very significant and positive development which could push the investment cycle and lead to higher GDP growth.
MARKETS
The markets did well during the month and we also saw a shift in leadership from defensives which are over owned and over expensive into interest rate sensitive stocks. Most Fund Managers have been taken by surprise with the developments during the month and still continue to have disproportionate allocation towards fear i.e. defensives. The real shift still needs to take place and should happen over the next few months as the confidence grows on the economy. The 0.6% August phenomenon worked with the markets rallying over 8%. A large number of banks have announced deposit rate cuts subsequent to improved liquidity, slower credit off take and the RBI policy. This will ultimately lead to lower lending rates and create a boost to the economy as well as earnings growth of corporates. Mid caps have continued to lag large cap performance; however this should change going forward. Technically, as the chart below shows the BSE Mid Cap Index has seen a clear move above the downward sloping trend line over the last couple of weeks. 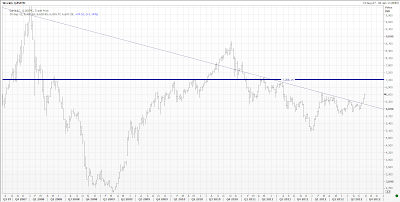 The overall outlook continues to be constructive with the potential that Euro zone will continue to create volatility at different points of time. With interest rates trending down the potential of stock picking being rewarded will increase going forward.
Tweet