Skip to content
As the year started off, things looked optimistic in the global and Indian context based on several factors. In the Indian context the positivity was primarily based on expectations of a more proactive government on the ground and also an easing of inflationary pressures which would force the RBI to act. In the global context the positivity was based on easing concerns in Europe with regards to the sovereign crisis in the peripheral economies, the expected weakness of the Japanese Yen based on monetary easing in that country which would lead to positivity in the Japanese economy as well as the re-emergence of the Yen carry trade. The positive economic data coming out of the US combined with the relative attractiveness of equities versus bonds was also expected to be positive for equities globally.
In this context my expectation at the beginning of the year was that we should see new highs in several Western economies stock markets and a positive trend to build up in India & some other EM’s  too. As expected we have seen the US and European markets do well and a tear away rally in Japanese equities. Some EM’s have done well but a lot of larger EM’s have underperformed in this time frame.
In the Indian context the year started off well, however renewed concerns on inflation and government on ground action led to a loss of momentum in the months of February & March. Concerns on a high Current Account Deficit has also played on the minds of investors. Continued FPO’s by the government in order to meet its disinvestment targets at lower and lower prices also soured sentiments where incrementally investors lost money on every following FPO.
However a rapid decline in global commodity prices over the last two months, which is something that was always imminent at a time of poor consumption and high prices has come as a very positive development for India. We have seen most global commodities correct 15-20% in this time frame, which combined with extremely poor demand conditions in the Indian economy has led to a virtual collapse in inflationary outlook where we have seen the WPI already fall below 6% in March and is likely to reach a level of 4.5% over the next two months. Why RBI is not able to see this move in inflation and why they are not bothered about economic growth is something only known to them at this stage.
The global scenario in terms of the stress on the credit markets has eased off significantly with both Italian & Spanish bonds seeing yields fall to pre crisis levels. This is something that is very positive in my view given that there has been a huge political crisis on in Italy with regards to the formation of a new government. The other big event has been the fall in precious metal prices where we have seen a huge sell off followed by some bounce back. However all indicators suggest that the bull phase seems to be over for these metals for a very long time. Infact the chart of gold price movement that we see now is very similar to that we saw in the mid 1980’s where the gold prices crashed by nearly 70% from the top. Lets see how it plays out this time, however we should see gold prices correct to atleast $ 1150 per ounce over the next few months. The first chart below is that of the mid 1970’s to 1983 and the second one is of the current gold move. As is always in the first crash of any asset class it is taken as a correction and people who were standing on the sidelines watching the upmove jump in to buy. This is apparent in gold now as physical consumption has picked up significantly over the last 10 days. However this upward correction is unlikely to sustain as gold demand supply dynamics clearly indicate that it has primarily been investment demand that has driven gold prices up. Gold consumption for jewelry peaked in 1997 at around 3300 tonnes, which today stands at just around 1800 tonnes. Overall consumption is almost the same driven by huge investment demand. As the trend gets broken we are likely to see investment demand fall off drastically taking the commodity into surplus. This downmove should ideally last a few years now.
GOLD 1970’s-80’s 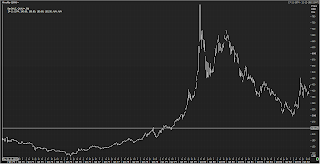 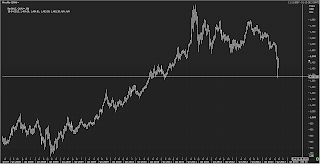 Bond yields of troubled European countries have come down to precrisis levels and the debate on austerity has reached a stage where it seems clear that continued austerity will not be politically palatable as the crisis has eased off.  The combination of these two combined with a much needed weakness in the Euro over the last three months should lead to some sort of recovery starting in the European economies over the next two quarters.
ITALY 10 YEAR BOND YIELDS 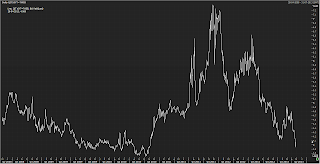 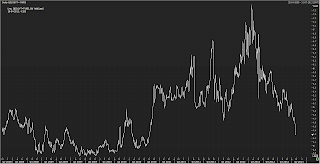 MARKET OUTLOOK
The market outlook is supported by strong macro turnaround indicators i.e falling inflation as well as an imminent decline in interest rates in the economy, all forecasts predicting a normal monsoon as well as a result season that has been quite reasonable till date. However on the contra side is the renewed political wrangling which are stressing the already subdued governance in the country. On ground performance of various promises of the government as well as the expectations from the Cabinet Committee on Investments has been below par till date. On top of that we have a sceanario where most developed markets have done very well YTD & there could be a corrective move in these markets at some stage.
In this context the action that the RBI takes in their next meeting is going to be very important. A focus on growth will push the Indian markets forward and we could see the reversal of the sharp underperformacne YTD. However inaction could see the markets go back into hibernation for some time again. The odds are in favour of a push towards growth. At this stage we are virtually flat YTD. A 15% return from here till End of the Year should still be possible.
Tweet