Skip to content
THE RUPEE WILL KEEP FALLING – Given the Current Account Deficit situation and the inability of exports to pick up despite the sharp underperformance of the INR against most competing currencies a theory is gaining ground these days that the INR is overvalued and it should fall more to make imports unattractive and exports more attractive. Keeping rates high has also been cited as a reason by RBI to keep rates high. Most of these are without basis. The facts are –
INR has fallen hugely against most competing currencies – If we look at the performance of the INR since the beginning of the year 2011 the currency has fallen nearly 22% against the USD. In the same time period the Chinese Yuan has appreciated 6%, Korean Won is flat, Thai Baht is up 3%, Indonesian Rupiah is down7% etc. Similar is the movement of most other EM currencies except for the Brazilian Real that has fallen almost as much as the INR. Under the circumstances it is difficult to argue that the INR is overvalued.  The reasons for poor export growth lie more in the issues that most exporters are facing due to the slowdown in the domestic market and high interest rates which are making Indian exports uncompetitive as they do not have the ability to provide cheap export credit at a time when most of the competing countries have record low interest rates. Moreover the reason also lies with higher imports due to one the inability of the domestic production to keep up with growing consumption specially in products like edible oils where imports are up from $2 billion to $ 10 billion plus over the last 3-4 years, Coal where imports are up from around $ 4 billion to over $ 12 billion and also due to mining ban on Iron Ore across the country where exports are potentially down by nearly $ 8-10 billion. The other two factors i.e. high gold and oil prices are well documented.
Under the circumstances while most people argue that the INR is going to fall going forward a combination of several factors actually point to the other side.
–Falling commodity prices are INR positive – As I wrote in a previous article the commodity cycle seems to have peaked out for at least medium term duration as of now. Falling commodity prices in Coal, Steel, Oil, Edible Oils, and GOLD etc are hugely positive for the INR as they reduce the government’s Fiscal Deficit as well as the country’s trade deficit. Fall in gold prices and reduced consumption by itself will reduce the CAD by nearly $ 10 billion this year.Infact Brent Crude prices are on the verge of breaking below the trend line that started from the March 2009 bottom. 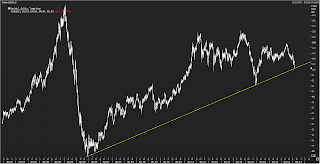